Smart Power Systems improves mobile power generation by integrating electronic control into a vehicle with an SAE J1939 multiplexing system and adding onboard diagnostics with event recording. Electronic control enables precise frequency output by controlling fluid flow through a hydraulic motor, ensuring a constant frequency output. Automated control features protect the system from conditions outside its designed operating parameters that may cause damage. The electronic controlled Multiplexing Interface Module communicates operation parameters in SAE J1939 approved format for integration with vehicle multiplexing. This paper describes the design and features of electronic controlled hydraulic generators and how SAE J1939 has expanded the system’s functionality while making operation more straightforward for the user.

Multiplexing, or muxing, is a way of sending more than one indicator or stream of statistics over a communications hyperlink at an equal time in the structure of a single, complicated signal. Multiplexing is technique networks use to consolidate a couple of alerts. Including digital or analog – into a single composite sign transported over a frequent medium, such as a fiber optic cable or radio wave. When the composite sign reaches its destination, it is demultiplexed. The character indicators are restored and made handy for processing. 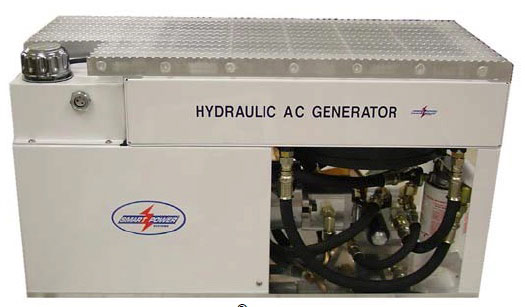 Each system includes an efficient hydraulic fluid cooling system to ensure the system temperature remains well below the operating limits of the components. Added larger than the critical cooling system operates in higher ambient temperature environments while enhancing long-term reliability.

The transmission medium is used to ship the sign from sender to receiver. The medium can solely have one signal at a time. Suppose there are more than one indicators to share one medium. In that case, the medium has to divide, so every sign is given some element of the on-hand bandwidth. For example: If there are 10 alerts and the bandwidth of the medium is 100 units, then the 10 unit is shared by way of every signal. When more than one alerts share with the frequent medium, there is an opportunity for collision. Multiplexing idea is used to keep away from such collision. SAE J1939 control enables advanced features such as expanded control, diagnosis, and operator feedback. Typically hydraulic systems rely on fluid flow (GPM) to maintain frequency and voltage. As hydraulic fluid changes temperature, viscosity changes affect flow rate, affecting voltage output. In addition, as load (watts) is added to the generator, the voltage increases. The hydraulic fluid flow is set to compensate but often falls short, causing the low voltage at full rated load. As ambient temperature increases, more significant losses in efficiency occur, creating the following issues: 1. Low voltage 2. Overheating 3. Generator component damage Improvements are described herein by adding electronic control in addition to multiplexing.

Goals for the Hydraulic generator

Since early 2003, we have equipped all electronic controlled generators with a unique proprietary electronic control system that optimizes performance and prevents generator and vehicle equipment damage. Including a multiplexing interface module, which converts all communication to SAE J1939 for integration into the vehicle’s centralized multiplexing system. 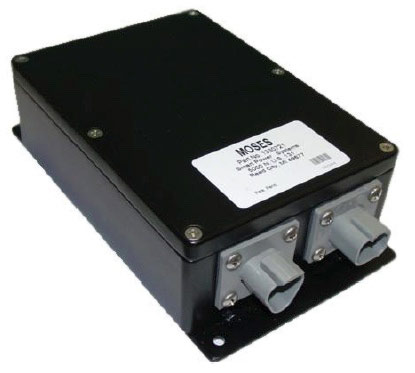 The interface module kit comes with a wiring harness 15′ in length allowing for mounting within 15′ of the generator tray assembly.

Broadcast Messages of the J1939

After successfully claiming an address, the module will begin broadcasting its periodic messages. There are two periodic messages, each broadcast once per second. These are “Generator Output” and “Generator Status.” The Generator Output message provides voltage, frequency, current, and operating temperature information about the generator. The Generator Status message includes information: whether the generator is running, could be started, the status of hydraulic pressure, the operating mode, the number of active alarms, whether an active alarm will cause a shutdown, and the total working time on the generator. The J1939 standard SLOTs (Scaling, Limit, Offset and Transfer function) expresses all values.

All systems are available without the multiplexing interface module for users who do not have or desire a fully multiplexed vehicle.

The user interface display is the Command and Control Center (CCC), which is included even with systems equipped with the multiplexing interface module. The National Fire Protection Association (NFPA) requires a display within sight of the distribution panel on fire and rescue apparatus. The standard CCC’s small size and low cost make it a much more suitable display than adding another full multiplexing display at this location. The CCC is ruggedized for the environment and features a compact size, sealed, and 100% solid-state design. Smart Touch® non-contact switching eliminates failures caused by water, mechanical damage, and operational problems caused by bulky gloves. See Figure 3. Multiple displays can be connected to the system using a simple y-splitter and additional wiring harness. 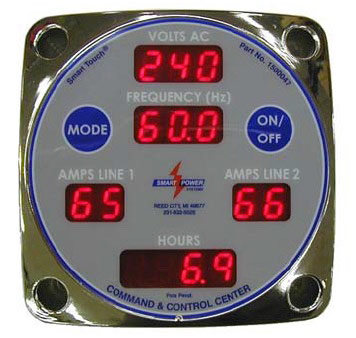 The Electronic Control Unit, or ECU, is located in the tray assembly and is the system’s brain. The ECU optimizes performance to ensure cleaner frequency output. It automates generator functions to prevent damage to the generator and vehicle equipment. This protection starts from the second you press the “On” button by slowly increasing the fluid flow to the hydraulic motor, then regulating it to maintain exactly 60Hz. Commonly referred to as the “soft-start” feature eliminates shock to the generator components and the vehicle powertrain. The exact frequency regulation allows more sensitive equipment, such as battery chargers, communication equipment, and computers, without fear of damage. Once the system is running, the ECU continuously monitors all aspects of the generator. Monitoring ensures excessively cold fluid temperatures are not used while running, which can cause damaging electrical spikes. Also, monitoring ensures excessively hot fluid temperatures. Hot fluid can cause pump and motor damage due to insufficient lubrication or too much load, which can cause damage to the electrical system and vehicle wiring. The system will also ensure that running with low fluid levels or other conditions that could lead to premature failure are not allowed. Service reminders instruct the user when the hydraulic fluid filter needs replacement and ensure preventative maintenance is not overlooked as the only service required.

While all features required for a highly reliable and fully functional generator system are provided with the standard generator package. Many features are highlighted or added through the multiplexing interface module.

Easy operation with a multiplexing display 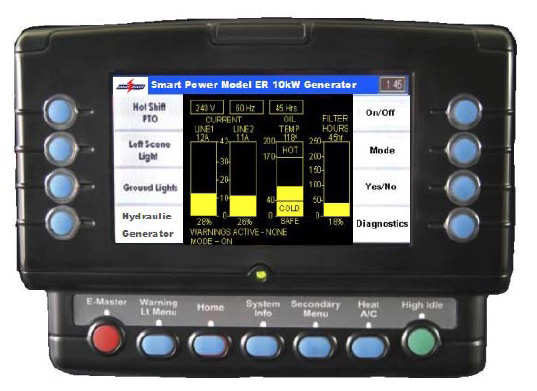 All generator operating information is available through the CCC display. Still, the full-color screen of a multiplexing display adds additional capability, which can provide the user with a complete understanding of the current condition of the generator. For example, if the generator’s load on line 1 is currently 41 amps, it will be displayed in the “AMPS LINE 1” block. If the system rates to 10,000 watts, the user may not realize that they only have 1 amp left before reaching the total rated capacity. The 41 amp readout can show over a bar graph showing how much usage is rated load on the multiplexing display. Another readout states explicitly that the generator was currently operating at 98% of its full rated load. See Figure 4.

The information displayed through the CCC may not be as understandable to a user unfamiliar with the system’s operation. The CCC will show a hot oil condition as “OIL HOT 185°F”. See Figure 5. 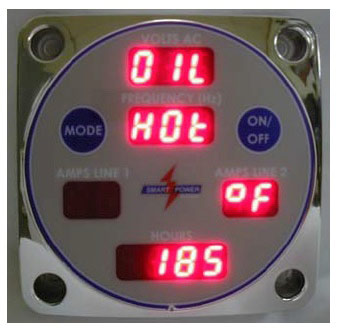 That same warning displayed on a multiplexing display has the additional space to read, “WARNING – System Overtemperature.” It even continues with real-time troubleshooting steps the user can take to remedy the problem. See Figure 6. This additional information can mean the difference between having electrical power and not having electrical power. In the fire-rescue industry, it can mean life and death. 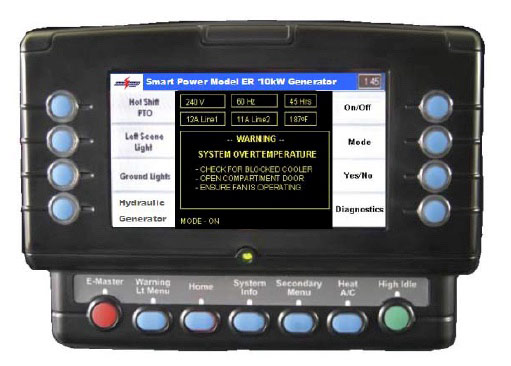